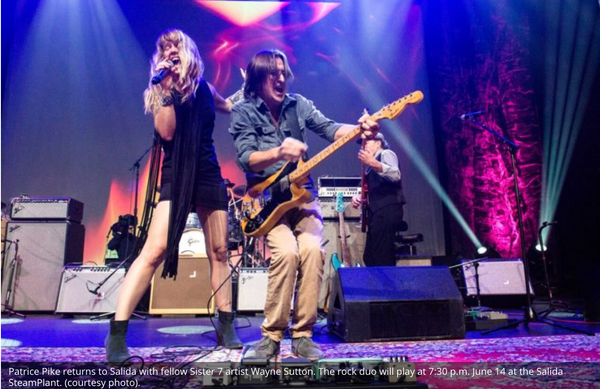 The Patrice Pike and Wayne Sutton Tour will rock the Salida SteamPlant Theater on June 14 at 7:30 p.m. in celebration of the two headliners’ 25 years together musically.

Pike is a staple of the Austin, Texas, music scene as well as an international touring artist who brought her soul-infused rock trio (sans Sutton) to the SteamPlant a couple of years ago. (Some might remember her impressive drumstick solo up and down the SteamPlant theater handrails during the show!)

Both Pike and Sutton grew up in Dallas and met while she was attending the Booker T. Washington School of Performing and Visual Arts. Sutton attended another high school, but a friend invited him to go hear her sing and before long Pike and Sutton formed an acoustic duo. During her freshman year of college they decided to forego higher education to focus on music. They created the jam band Little Sister, later Sister 7 of Arista Records, and spent a decade touring with other jam bands such as Blues Traveler, The Dave Matthews Band and the Allman Brothers.

Their mutual appreciation for seminal ’60s and ’70s hard rock (today’s “classic rock”) and timeless funk, blues, R&B, world and roots music complements their improvisational and musical exploration tendencies. “We’ve been able to experiment with all these styles of music together over the years,” Pike said, “yet maintain a consistently unique sound based on Wayne’s guitar style and my soul influence even amid the eclectic range of music.”

One rendition of their song “Chico” showcases their improv expertise as the band eases in and out of an extended jam of Led Zeppelin’s “Whole Lotta Love.” Pike said the merger of the two songs happened spontaneously while she was introducing the band members and giving them a quick solo during the song “Chico.” On her turn to solo, Pike slid into the Zeppelin classic and the band played along. The musical combo has been a hit with the band – and audiences – ever since.

As songwriters, both Pike and Sutton start from rhythmic and percussive places, drawing from elements of soul, blues, jazz, rhythm, roots and rock. “The jumping off point for writing songs is the percussion, the riffs, the drum grooves,” Pike said. “The chords and melodies are important, but there’s something primal about rhythm. It’s critical to know where the beats fall and where you feel the subdivision of the beats in your body. ”

Anyone who has seen Pike’s YouTube videos or live shows at Austin’s Saxon Pub is aware of her impressive hand-percussion and drum kit skills. As one critic said, “Patrice effortlessly moves from tightly woven rhythm guitar to percussion, to drum kit on stage, never dropping a beat of her fierce but silky lead vocals.”

But Pike didn’t pick up guitar or drums until Sutton encouraged her to do so. “He’s a phenomenal songwriter and an under-celebrated guitar player,” she said, adding that learning to play harmonies and chords transformed her songwriting skills. “We had a lot of conversations about the importance of great songwriting. I feel like he really did something important for me to engage in that conversation. In high school, I played violin and French horn in symphonic groups and sang solos, but I never played an instrument that I could play chords on. That opened up a whole new world for me to explore. I’m really thankful to him for that.”

Beside Pike and Sutton, the June 14 performance will include drummer Brad Evilsizer and bassist Glenn McGregor.

The group’s 2017 summer tour through Colorado, New Mexico, California, Oregon and Washington includes performances as well as time to relax and focus on songwriting for a new album they plan to record this fall. As a result, they’ll probably debut a few new original songs in Salida.

“Fencing under Fire” is the first album Pike and Sutton made after the Sister 7 hiatus in 2001. “Since branching out from Sister 7 we have collaborated on two live albums and multiple studio albums that are available online,” Pike said. “Currently we are working on releasing a live EP, “The Evolution of Pike and Sutton,” and will be releasing videos online in advance of the EP.”

Most of their music is original, written by Pike and Sutton separately and collaboratively. And just as in their Little Sister/Sister 7 days, each will take turns on lead and backup. Their concerts are full of danceable tunes but also ambient songs that are perfect for venues like the SteamPlant, Pike said. “It’s a great place to sit and relish the music and really hear it.”

Pike’s lyrics are full of social justice messages, but she doesn’t hit you over the head with them. “Most of my songwriting is about challenges in general and how important it is to cultivate a positive outlook and a perspective that leads to life-affirming and life-supporting ways of living for each other and ourselves,” she said. “You can’t, nor should you, tell people what to do. But you can encourage them to think about it so that it becomes something that really matters to them. I hope my music really does that on some level.”

For tickets to the June 14 show, visit www.SalidaSteamPlant.com. The rockin’ concert will follow the Salida Chamber of Commerce’s Business After Hours Kickoff to FIBArk, also at the SteamPlant.