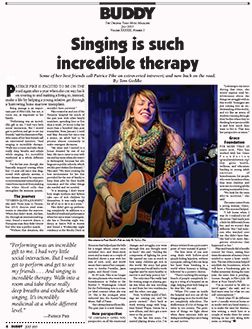 Singing is such incredible therapy

Some of her best friends call Patrice Pike an extroverted introvert; and now back on the road.

Being onstage is an impor­tant part of Pike's life, but not, it turns out, as important as her family.

"Performing was an incred­ible gift to me. I had very little social interaction. But I would get to perform and get to see my friends," said the diminutive Pike, who some of her best friends call an extroverted introvert. "And singing is incredible therapy. Walk into a room and take these really deep breaths and exhale while singing. It's incredibly medicinal at a whole different level."

For the last year, though, she basically stopped touring when her 15-year-old niece was diag­nosed with aplastic anemia, a rare disease caused by exposure to environmental toxins that pre­vents bone marrow from making the white blood cells that strengthen the immune system.

"IT'S BEEN QUITE A JOURNEY," she said. From June to Decem­ber 2014, doctors tried treat­ments to stimulate the marrow. When that didn't work, the fam­ily, through an international reg­istry, found a marrow donor, a European man they didn't know but who was a perfect match.

"Without that donation, she wouldn't have survived."

Pike rotated in and out of the Houston hospital for much of the past year with other family members, spending four or five days a week, 24 hours a day for more than a hundred days post transplant, from January 2 until mid May. Because her niece was a minor, an adult had to be present almost constantly to make emergent decisions.

"My sister and I moved to a house donated by one of my fans. My niece came to stay with me and my mom when she wasn't in thehospital, because her sib­lings are in public schools, which are like petri dishes (for disease) ," Pike said. "We were creating the best environment for her that provided for the rest of family to keep their jobs for their health insurance and the other things she needed and we needed.

"It is amazing. I don't know how single mothers and fathers take care of sick children by themselves. It was really tough for all of us to do it as a team."

Pike didn't give up perform­ing completely. In addition to a handful of weekend performance when her niece wasn't emergent, she has a Thursday night resi­dency at Saxon Pub in Austin and found a Wednesday night residency at the Mucky Duck in Houston that helped pay the bills for a singer whose career once included two- and three-week tours and as many as a couple of hundred shows a year with her mix of rock, soul, and world music that's earned her compari­sons to Aretha Franklin, Janis Joplin, and Sheryl Crow.

At 45 now, Pike is no longer the teen phenom who went from homelessness in Dallas to the Booker T. Washington School for the Performing Arts to a ma­jor label contract when she was 16. She is the youngest artist inducted into the AustinfTexas Music Hall of Fame.

She's always learned from life. The past year is a new lesson.

"IT CERTAINLY GIVES YOU perspective on all the emotional changes and struggles you went through that you thought were so hard," she said. "Adding the component of fighting for your life opened my eyes so much to how many children get sick in this world. My niece had great caregivers and we all had to work together and be more healthy to survive it and help protect her."

The only time Pike really had for writing songs or playing gui­tar was when she was traveling to and from her two residencies and the other, rare gigs.

Now, "a whole world of feel­ings are coming out, and I'm pretty excited." She's back at work writing songs with long­time friend Wayne Sutton for a new album, and she's got a new twist to the process.

"In the last few years, I've started playing drums a lot. I've always written from a percussive point of view instead of guitar."

The first verse of one new song deals with hollow-eyed people feeling hopeless, without a purpose, asking if she can keep her heart from breaking in a world where honesty is fading, followed by a positive chorus.

"There's nothing like seeing a bunch of people completely liv­ing in a wing of a hospital on an edge, helping their kids hang on for dear life," she said. "When TVs come on inside the hospital and you see all the things going on in the world that are completely ridiculous. The shallowness of a lot of things we value in our society. The petti­ness of things we fight about when these innocent kids are doing everything they can to hang on and survive.

"Listening to my niece during that time, she would express total be­wilderment about the things we struggle with in this world. Teenagers are just coming into an un­derstanding of this world, and it's like an artery of wisdom running through their bodies when they're thinking how precious life is and how much they want to live it. That was her perspective at times."

FOR MORE THAN 10 years now, Pike has worked with her Grace F o u n d a t i o n (gracefoundationusa. org) that gives health, wellness, and education funding to young adult survivors of homelessness, for people who were homeless when they were children and now are recovering adults creating sustainable lives.

"We look for the ones who've survived , " she said.

The name comes from a young woman, Grace, who Pike met and helped.

"I left home when I was 16. I realized a lot of decisions I had made just a little bit differently from her, and we weren't that different. But I had men­tors who watched over me. She didn't have that. She had a lot more dan­gerous situations that happened to her."

Pike and friends did a benefit concert for Grace, raising four times the amount of money Grace needed to repair a heart condi­tion. The rest of the money helped establish the foundation, which will have a fundraising gala in Dallas sometime during the next year; the exact date is pending. Sooner, though, is Pike's July 18 show at Poor David's Pub

"I'm so excited to be able to travel again," she said, and to find more time for what we can call contemplation."

"I think what I'll do different now – I usually wrote at home or in studio with my band mates—is to make the time for destina­tion writing, a week here or a couple of weeks there for some writing on my own along with some co-writing." ■